We have a proven track record of success in handling over 15.000 criminal cases and consistently awarded as one of Ohio’s Best Criminal Defense Firms. We treat our clients like family with a non-judgmental approach. Knowledge is power in any situation. We are here to help educate you about your circumstances. Use our resources below to contact us and learn how we can help you.

Most Common Types of Criminal Defenses

The fact that you have been arrested and charged with a criminal offense does not necessarily mean that you will be convicted. There are several defenses that can result in a dismissal of the charges against you. The most common type of criminal defense used in court is self-defense or the defense of others. For example, a defendant may argue that while they did use a gun to shoot an intruder or trespasser, they did so in self-defense or the defense of the other people in their home because the trespasser or intruder was threatening them in some manner. 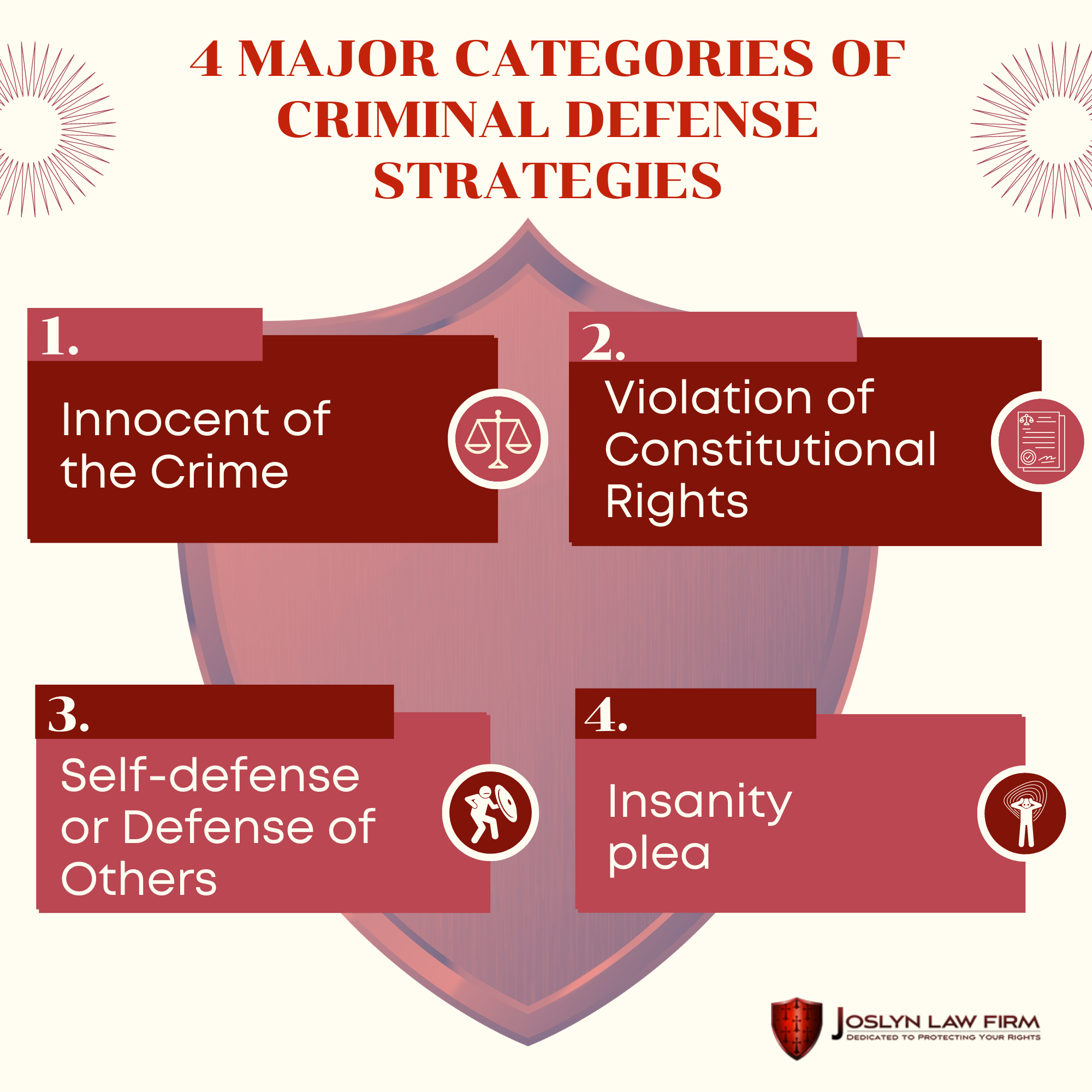 What is a Good Example of Criminal Defense?

If you are arrested for a criminal offense, the most important thing that you can do is contact an experienced criminal defense attorney immediately. Your time to defend yourself is limited due to the fact that evidence can be lost, destroyed, confiscated or altered. The Joslyn Law Firm will make every effort to fight the criminal allegations against you in Columbus, Ohio. Brian Joslyn is an experienced criminal defense attorney and will make every effort to find defenses or mitigating factors in your situation. Call the Joslyn Law Firm for a consultation today.

Challenging the Admissibility of Evidence

Challenging the admissibility of evidence is one of the most effective criminal defenses to many criminal charges. In order to challenge the admissibility of evidence in a criminal case, your attorney may want to file a Motion to Suppress Crime Evidence. Motions to suppress evidence inappropriately obtained often can mean the difference between a “guilty” verdict and a dismissal of your case. The evidence obtained by the police before or after your arrest is often the backbone of the state prosecutor’s case against you. However, the police must comply with search and seizure laws when obtaining this evidence and respect each individual’s constitutional rights. A few of the many potential issues that can support a Motion to Suppress can include, but are not limited to:

Insufficient Establishment of the Elements of Your Criminal Charge

A criminal conviction in Columbus, Ohio requires the state prosecutor be able to prove every element of the charges against you beyond a reasonable doubt. If the prosecution cannot meet this high standard of proof, there can be no criminal conviction. State prosecutors often charge individuals without having enough evidence to prove each and every element of the criminal charge. Where there is any disagreement between the prosecutor and the defense attorney about the failure to prove the alleged facts of the case beyond a reasonable doubt, the defendant then has a defense to the charge. If the prosecution cannot prove the criminal elements of the charge, your case may be dismissed or result in an acquittal.

Police sometimes entrap an individual when they provide the opportunity, means and motive to an individual to perpetrate a crime and/or have caused a crime to be committed by an individual who would not have normally committed the crime. This type of situation often is brought about by a confidential informant or an undercover law enforcement official. If you have been induced by law enforcement to commit a crime and are subsequently charged with that offense, the entrapment defense may be available to you.

Attacking the Credibility of Undercover Informants

In some criminal investigations, law enforcement officials will use confidential informants. In many cases, the confidential informants are financially troubled, drug addicts or have existing criminal histories and/or pending charges against them. Often police use these facts as leverage against the informant and offer an exchange of money, a reduction of pending charges, or even a dismissal of pending charges in exchange for incriminating evidence against the targeted alleged offender. This kind of scenario frequently creates an incentive to lie about the evidence gathered for the purpose of allocating guilt to the alleged offender. In such cases, the informant works in a biased manner and will often do whatever is necessary in furtherance of his or her self-interest. Possible undercover informant scenarios can include the following:

In these types of situations, it is crucial to seek the advice of a competent Ohio defense attorney who knows how to exploit the informant’s improper motive and attack his or her credibility.

A 40-year old married man found himself charged with a second-degree felony in Franklin County after a drunken scuffle at a local bar. This individual had always led a law-abiding life, but was now facing a lengthy prison sentence all because of one intoxicated incident. Once our attorneys received the evidence in this case, we realized the facts were not in our favor. It took thorough preparation and research to create a strong defense for our client.

Our attorneys called and interviewed several witnesses, held meetings with the State, spent hours reviewing, and breaking down the evidence. It was assumed this case would be taken to trial since the State was unwilling to compromise on a deal. We were thoroughly prepared to go to trial to ensure we received the outcome our client deserved. As a first-time offender at in the wrong place and the wrong time, our attorneys understood prison was not the appropriate place for this family-man.

The attentiveness and persistence of our attorneys continued throughout the entire case. After nearly an entire year of this case going on, our attorneys were able to resolve the case as a first-degree misdemeanor. Our client went from facing a lengthy prison sentence to having the entire criminal case terminated with a misdemeanor for time served. We knew our client wasn’t fit for prison and in the end, the State and the Judge agreed.