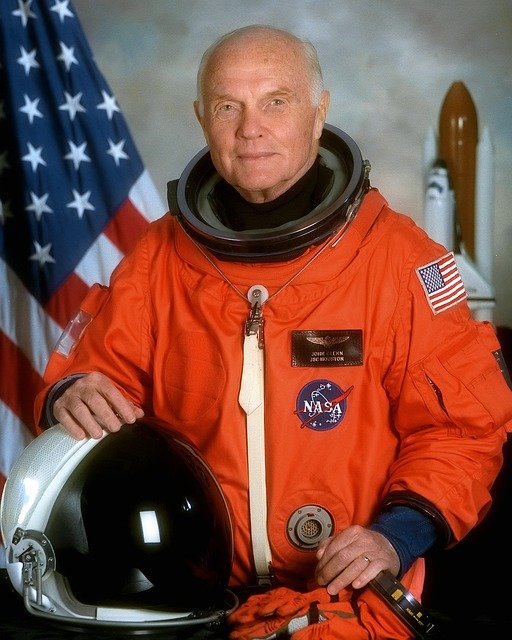 John Herschel Glenn Jr. was a decorated military war veteran, a pilot, a famous astronaut, and a United States senator. Glenn is known best for his flight on Friendship 7, when he orbited Earth three times. From childhood, Glenn was interested in flying, and he was also interested in science. Glenn cemented his place in United States history with his accomplishments, and many consider him to be one of the country’s biggest heroes.

John Glenn was born on July 18, 1921, in Cambridge, Ohio. His parents were John and Clara Glenn, and his father ran a plumbing company. When Glenn was growing up, he had a strong sense of patriotism. Glenn graduated from high school in 1939, and then he went to college nearby. In 1942, he entered the Naval Aviation Cadet Program, and the following year, he finished college.

Glenn became a Marine fighter pilot during World War II, flying 59 combat missions. After World War II ended, Glenn stayed in the Marine Corps. He was also a fighter pilot in the Korean War, flying 63 missions as a Marine fighter pilot and 27 missions with the Air Force as an exchange pilot. Glenn was awarded the Distinguished Flying Cross six times for his flying during the wars. Glenn also earned the Air Medal with 18 clusters for his military service in World War II and the Korean War. He was also given the Navy Unit Commendation, the Asiatic Pacific Campaign Medal, the World War II Victory Medal, and the National Defense Service Medal.

Glenn went to the United States Navy Test Pilot School in Maryland, from which he graduated in 1954, and then he was able to become a pilot with the Naval Air Test Center. In 1957, Glenn set a new speed record, flying from Los Angeles to New York in just three hours and 23 minutes. In 1959, Glenn set his sights on the space program, and he was chosen with six other men to become part of the Mercury 7 team of astronauts. On Feb. 20, 1962, Glenn was the pilot of the Friendship 7 spacecraft, which launched from Cape Canaveral and orbited Earth three times in almost five hours. A glitch with his heat shield forced Glenn to do some quick thinking and adjustments, but he made it safely back to Earth. The Friendship 7 mission made Glenn a hero, and President John F. Kennedy gave him the NASA Distinguished Service Medal. Glenn retired from the Marine Corps in 1965.

Glenn’s first political race happened in 1964, when he entered the Ohio Democratic Senate primary. Unfortunately, he suffered a concussion and had to leave the race because he was unable to campaign. But Glenn ran for the Senate and won in 1974. He won every county in Ohio in this election. He was then re-elected in 1980, that time having the biggest margin of victory in the history of Ohio. In 1986, Glenn won again with a large majority of the votes. Ohio elected him once again in 1992. With that election, Glenn became the first popularly elected senator in Ohio to win four consecutive terms. While he was a senator, Glenn was considered an expert on scientific and technical issues, and he worked to prevent weapons of mass destruction from spreading.

Glenn served in the Senate until 1999. While he was still a senator, Glenn started studying research about human aging and the symptoms that astronauts experience when they’re in space for a long time. Glenn met with NASA officials to discuss his thoughts, and NASA decided to do research on connections between aging and weightlessness. To do this research, NASA needed to send an older person into space. NASA said that Glenn could be a passenger on a space shuttle as long as Glenn could pass the physical. Glenn passed, and he began a training program to prepare for the mission. On Oct. 29, 1998, at the age of 77, Glenn became the oldest person to be launched into space, riding on the space shuttle Discovery. He spent nine days in space doing experiments and medical tests.

Glenn died at the Ohio State University Wexner Medical Center on Dec. 8, 2016, at age 95. He was buried at Arlington National Cemetery.