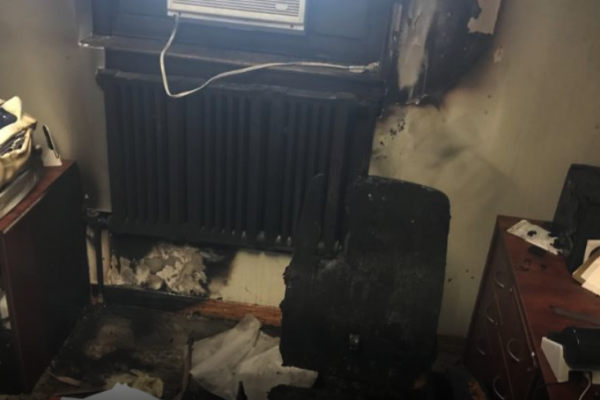 Miranda L. McCormick, 31, of Logan was arrested after allegedly starting a fire at the Hocking County Courthouse just after midnight Tuesday morning. McCormick has been charged with aggravated arson. She still may face more charges.

According to the Logan Police Department, officers were called to the 300 block of West Main Street after receiving reports that a subject was throwing bricks through windows of houses. A neighbor in the area gave a description of the suspect and police confronted McCormick who they said matched the description.

McCormick was allegedly outside the Hocking County Courthouse, where officers noticed smoke and fire coming out of a window of the courthouse building. When confronted, McCormick pulled a “large” knife on officers and then took off running. She then made it to a nearby apartment on East Main Street and barricaded herself inside.

She attempted to jump out of the second story window but then apparently changed her mind and started a fire in the apartment instead. Officers then forced their way in, put out the fire, and arrested McCormick.

Central Elementary School and St. John’s Catholic School were both closed due to concerns about the case.

Four houses were damaged from the suspect throwing bricks through the windows and one office of the courthouse had been burned with several others taking smoke damage. No one was injured in the incident.

Aggravated arson is a first degree felony which carries a possible prison sentence of between three to 10 years and a fine up to $20,000. McCormick may also face criminal mischief charges for smashing the windows of the houses, breaking and entering charges for entering the courthouse and starting the fire, and perhaps state terrorism charges for having the explosive devices.