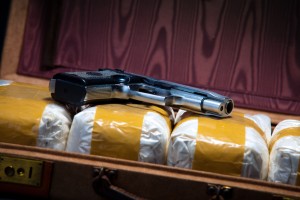 The United States government has been adamant about cracking down on drug-related crimes since the Controlled Substance Act passed in 1970, and agencies like the Drug Enforcement Administration continue to make arrests for offenses throughout the country.

During these operations, agencies are searching for those violating several drug laws, including possession of a controlled substance. However, these sweeps most often are used to arrest those accused of trafficking or selling a substance. The offenses would be considered federal crimes, which often are much more severe.

According to federal law, trafficking is the selling, manufacturing, delivery or cultivation of controlled substances, or possessing those substances with the intent to do so. It can range from international cartels with thousands of people involved to small neighborhood drug rings.

Controlled substances are divided into five schedules on the federal level. According to 21 U.S.C § 811, the U.S. Attorney General has the authority to place any substance on the list of drugs found in the Controlled Substance Act.

The schedules are determined based on the possibilities for abuse and addiction, as well as its medical use. The schedule of a controlled substance often plays a large part in determining the penalty for the offense.

Schedule V substances under federal law have the lowest potential for abuse, limited potential for addiction and a currently accepted medical use. These typically are available as over-the-counter medications and typically are not involved in federal charges. This could include Robitussin AC, Lomotil and Lyrica.

These federal drug charges are some of the harshest in the nation, and they can carry mandatory minimum sentences. This means if a person is convicted of a charge and the U.S. Attorney can prove certain circumstances, the assigned penalty is the best punishment the defendant is eligible to receive.

For federal trafficking charges, the sentence typically depends on the type of drug involved in the offense, the amount of the drug possessed, whether anyone was seriously injured or killed and the number of prior offenses.

Certain trafficking offenses can carry a mandatory minimum of life in prison, including if the person accused of the offense is convicted of being a principal, organizer or leader of a continuing criminal enterprise. This sometimes is referred to as a “kingpin.”

When mandatory minimums are assigned to a charge, the judge typically does not have discretion in lowering the sentence, no matter the mitigating circumstances may exist. However, there are some ways in which an experienced federal drug crime lawyer can help you avoid the most severe penalties.

If you have been arrested for a federal drug offense in Columbus or the surrounding areas, contact Columbus federal drug crime attorney Brian Joslyn of Joslyn Law Firm. Brian Joslyn has years of experience advocating on behalf of clients in a multitude of drug cases, and he knows what it takes to have charges reduced or dismissed.

Call (614) 444-1900 to schedule a free consultation today. Brian Joslyn has offices in Columbus, Dayton and Cincinnati, the same locations as the U.S. District Court Southern District of Ohio court locations. He can work one-on-one with you to ensure you understand the charges and how to build a strong defense in a federal drug crime case.