Home  »  Understanding the Legality of Sobriety Checkpoints in Ohio

Understanding the Legality of Sobriety Checkpoints in Ohio 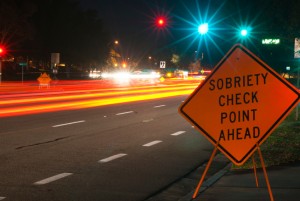 Ever since Ohio State University quarterback J.T. Barrett was arrested for operating a motor vehicle while impaired (OVI) and illegal backing near a campus-area sobriety checkpoint on Halloween, there has been increased conversation throughout the Buckeye State about what is and is not legal when it comes to these driving under the influence (DUI) roadblocks.

A November 6 story in the Columbus Dispatch was entitled, “Are DUI checks fair?” A story entitled, “Stop that nabbed OSU quarterback common” was published in the Toledo Blade on November 16 .

The basic constitutionality of sobriety checkpoints was upheld in the United States Supreme Court’s 1990 decision in the case of Michigan Department of State Police v. Sitz. In that case, the Court voted 6-3 that DUI roadblocks satisfied the Fourth Amendment standard of reasonable search and seizure because the state has a “substantial government interest” to prevent drunk driving.

Sobriety checkpoints still need to satisfy other requirements in order to be considered legal. In Ohio, police need to have a uniformly random method of stopping vehicles–such as every third or every fifth automobile.

Additionally, public notice also must be provided regarding the planned checkpoint. The Ohio State Highway Patrol will typically provide a notice of the general date, location, and time frame of a roadblock roughly one week in advance with the exact location and times being announced within 24 hours of the actual checkpoint.

In many cases, police set up roadblocks in locations specifically such that legal turnarounds are essentially impossible. In Barrett’s case, for example, he was cited for illegal backing as well as OVI.

It is important to remember that even when a person believes that he or she has legally turned around to avoid a sobriety checkpoint, another officer could be stationed nearby specifically to note such evasion attempts. Any failure to signal or other minor traffic infraction can then be used as a separate reason to stop a motorist and possibly lead to an arrest for OVI.

Of course, the absolute safest way to avoid any issue with a roadblock in Ohio is to not drive drunk. With many people likely to be partaking in alcoholic beverages at a variety of functions this holiday season, it is in everybody’s best interests to make sure they have designated drivers or alternate forms of transportation arranged in advance of their evening plans.

Whether you were arrested for OVI at a sobriety checkpoint or any other location in Ohio, you should immediately contact an experienced DUI defense lawyer in Columbus, Ohio.

Police can violate the constitutional rights of alleged offenders in a multitude of ways–not limited solely to roadblocks, and a knowledgeable attorney can investigate to determine whether any such transgressions could lead to your criminal charges being reduced or dismissed.