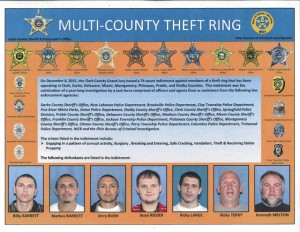 Accused ring leader of a crime ring in Clark County which had been named “Band of Thieves” which spanned over 11 different counties in Ohio and stole valuables that equated up to millions will be spending 27 years in prison.

Ricky Terry pleaded guilty in August to more than a dozen charges which included engaging in corrupt activity, theft, and breaking and entering.  He received the maximum sentence at Clark County Common Pleas Court.

Read More of the article on Dayton Daily News.